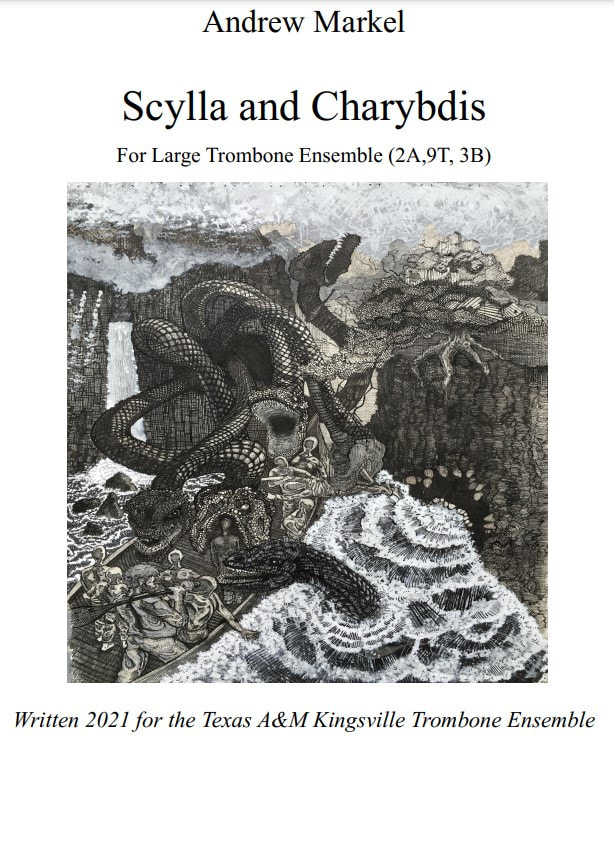 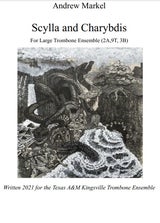 The work “Scylla and Charybdis” follows the Ancient Greek story as told by Homer. The tale depicts a crew of sailors tasked with passing a straight between two monsters. The piece starts with a depiction of the conflict between fear and bravery that these sailors face when approaching the monsters.

It continues then to depictions of both monsters, starting with Charybdis, a large whirlpool, sucking in oceans with each breath. It is represented by a slow moving, 10-note passacaglia and dominating bass trombone interjections, underlying fast moving fugal passages, creating a stormy intensity that grows into a full chorale. After that, the piece shifts to depict Scylla, a monster with six ever-shifting heads, perched on the angled cliffs that overlook the straight. The fast-paced, mixed-meter dance of this section leads listeners to experience the unpredictability of Scylla and the disjunct melodies show the cliffs on which it lives. Listeners can still hear the passacaglia melody from Charybdis looming in the shadows of Scylla’s jagged cliffs.

The piece then moves back to the ship, where Jason, the captain, has to choose the lesser of the two evils. This results in a decision to move closer to the rocks of Scylla, where the battle begins. Heard in a driving steady beat, the rowers push to their fate. This however, does not come without casualties, as four crewmen are snatched from the boat by four of Scylla’s six heads, heard in ripping interjections of the top trombone parts. The piece comes to an aggressive statement of the passacaglia theme and concludes with a triumphant finale where two more crewmen are snatched from the ship and ends with the first and only resolved major chord in the piece as the ship finally approaches their next destination. I hope you enjoy experiencing the tale of “Scylla and Charybdis.”